The pace of technological change accelerated during the 1980s. By the mid to late 80s Shimano’s SIS , Sachs’ ARIS, Suntour’s Accushift and Campagnolo’s Synchro were offering some variety of indexed shifting to the mass market. Older companies like Simplex and Huret were left behind, merged or slipped into bankrupty.  At the same time, tubing types proliferated. Vitus reformatted Durifort into Vitus 888, and added 172, 181, 971, 980 and 983 for various applications and levels of performance. Bertins used some of these types in various combinations.

As well, Reynolds had released 753, 501, 501SL, 531 Professional and 531 Special Tourist. Columbus had diversified its product offerings as well  with Aelle, Aelle R, SP, SL, SLX and on into Cromor, Nivachrom, Gilco and other special application steels.

As steel tubesets specialized and diversified, highly sophisticated aluminum and titanium tubes came into the high end of the market. As well, there was a boom in special tubesets for the exploding mountain bike segement of the bicycle marketplace.

In all of this, Cycles Bertin caught the wave. The 80s saw a shift away from the classic Vitus and Reynolds products and over to the more fashionable Columbus tubesets as frame tubing decals in the Gallery testify. As might be expected of a Shimano distributor, more and more of the Bertin product line came with Shimano as the decade advanced. In North America, Bertins became less available except for a few individual dealers in the U.S. and Canada.

An 80s Bertin with Reynolds 501 frameset and and early 90s Shimano 105 gruppo. Originally for sale on Ebay Canada.

A Bertin C 34 with Reynolds 531 main frame and a Vitus Durifort fork equiped with a 1st generation Shimano 600 gruppo.

This is a later 80s Bertin Cyclotouriste built with a Vitus 888 frameset and full touring equipment including a brazed on generator, lights and racks. It was originally owned by Wally H. from the U.K. who has since sold it.

This is probably a Bertin c 270 with a full Reynolds 501 frameset found originally on leboncoin, October 2009. 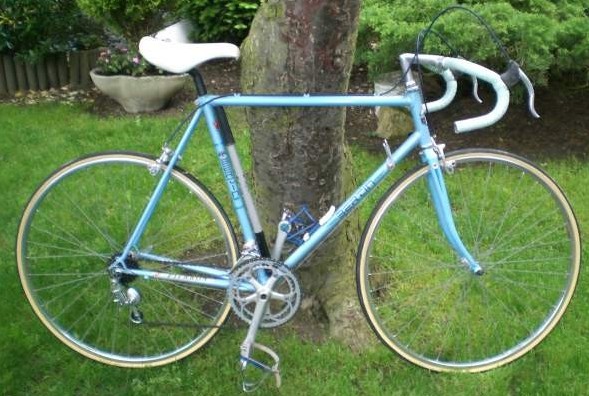 This Bertin is equiped with the rarely seen Shimano AX aerodynamic gruppo from the early 80s.

This is a Bertin C 210 or 220 built from Columbus Aelle. It was found on the Sargent website in London.

This possible C 70 model Bertin was shared by Steve V. of California. Note that this bike retains full French equipment.

This Reynolds framed C 37 is set up as a Sportif bike with fenders and handlebar bag but has an early Shimano 600 gruppo. 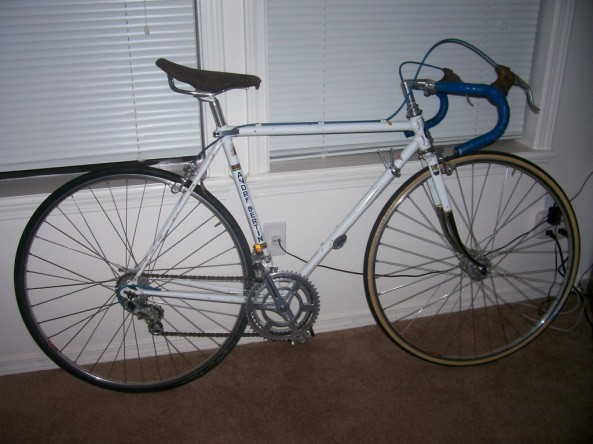 A Bertin C 37 with a full Campagnolo Nuovo Record gruppo, the top of the line option for Bertin racing bikes. This bike was from a German online bicycle museum site Rembetis- Historische Fahrrader. 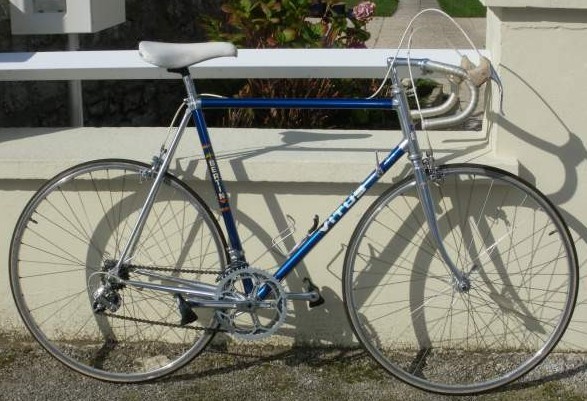 This Vitus 979  bicycle would be identified by Bertin as either a C 181 and so on in numerical sequence up to C 581 depending on the equipment fitted. This may be a C 581 as it appears to have 1st generation Dura Ace fitted.  Cycles Bertin also sold the aero profile 979s and the carbon tubed framesets but seemingly did not give them distinctive Bertin model numbers.

This thoughtfully upgraded Bertin C 35 was contributed by Lorenzo from Philadelphia.

This woman’s frame is built from Durifort tubing and features a stepthrough frame design.

This refinished Bertin C 171 is Shimano Exage equipped and was found on le boncoin from France. 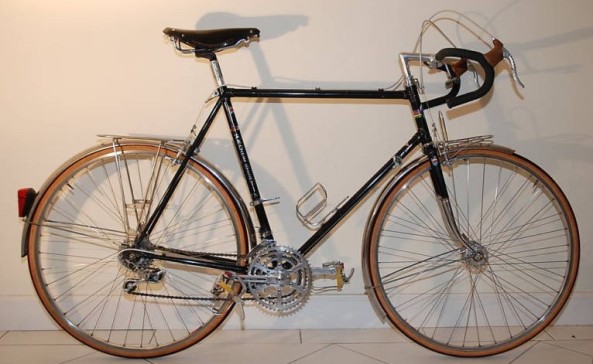 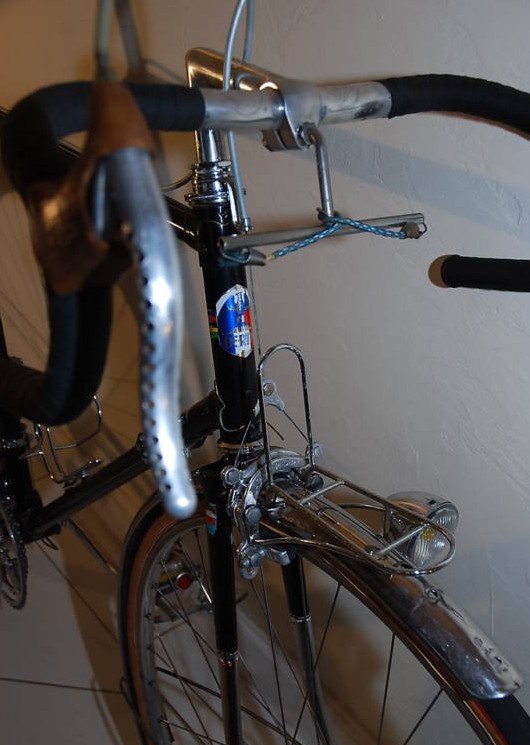 This Bertin randonneuse from EBay is fully equiped for distance cycling. It also has a bottom bracket generator with a seat tube lever control for convenience.

This Bertin 979/Futural has the later Vitus duralinox seat cluster and an early Shimano 105 gruppo. 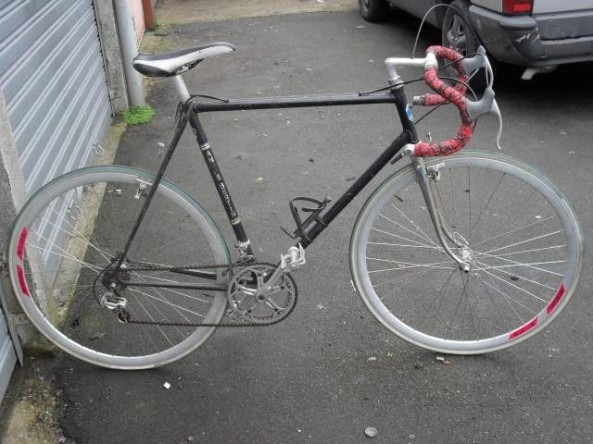 This shot of a Bertin C 34 cyclocross bike  from leboncoin gives a clear view of the special cable routeing for these C 34s.

This Bertin C 37 is equiped with the original Shimano Dura Ace gruppo in its black anodized version.

Bertin Reynolds 753 framesets are rare so when this one appeared on line, it was worth showing.

The CTC in Britain advertised this Dura Ace equipped Vitus 979 in March of 2010.

Lugged and brazed of steel, this C 70, unusually, is fitted with Weinmann sidepull brakes and hooded levers as well as traditional French equipment.

A traditional style touring bike down to the Ideale saddle, this Bertin was found on leboncoin in March, 2010.

A well preserved Bertin C 34 shows off its Huret Challenger/TA drivetrain, the MAFAC 2000 centerpull brakes and its Brooks Professional saddle. 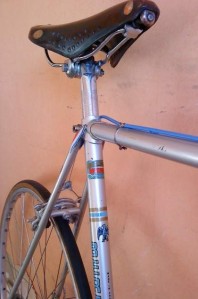 Details of the silver C 34 above.

A Bertin C 37? with classic Reynolds frame and fork and not so classic Shimano gruppo. 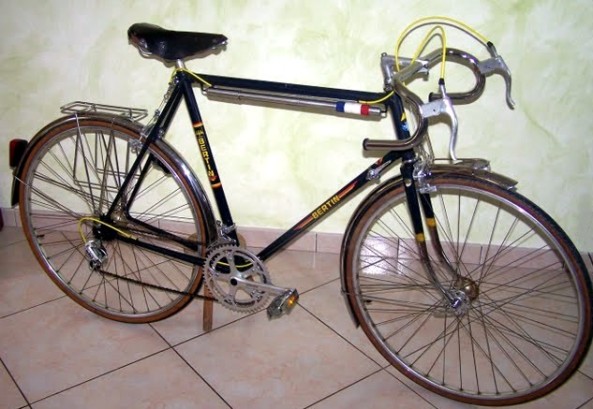 The Bertin C 31 above is , unusually, equipped with Universal brakes and hoodless levers.

This is a late 80s Bertin with a Columbus steel frame and RSX / STI triple gruppo.