One of the pleasant things about this blog is the number of interesting people who pop up in the Contact or Comments sections. They may be sharing a fact or insight, asking a question, leveling a criticism or reminiscing about a current or past Bertin. Sometimes you get a mixture of all of these things at once!

In that vein, in early March, an American reader contacted me and asked if I would be interested in seeing some pictures of a Bertin T2 tandem he had just finished refurbishing for himself and his wife. I agreed readily as Cycles Bertin had a long history of building tandems almost from the start of bicycle production.  An example of this is the mid-1950s Bertin C 40 shown in the Daniel Rebour catalogue illustration below.

As time went on, Bertin updated and upgraded both the materials and the equipment found in their tandems. The contact I received from John M. offered to share photos and details about his late 1970s Bertin T2 tandem pre-season refurbishment. I readily agreed and he sent the photos and details you will find in the following photos and text.

When originally purchased, John’s Bertin T2 had the Vitus 172 oversize steel tube frameset typical for its late 1970s build. The fillet brazed man/man frameset still had its original pale blue paint after about 40 years of use. The tandem was riding on 27 inch wheels which, after refurbishment are now rolling on 27 x 1.25 Panaracer Paselas.

Profile shot of the T2 as currently configured.

There is no Atom drum brake attached to the rear axle. 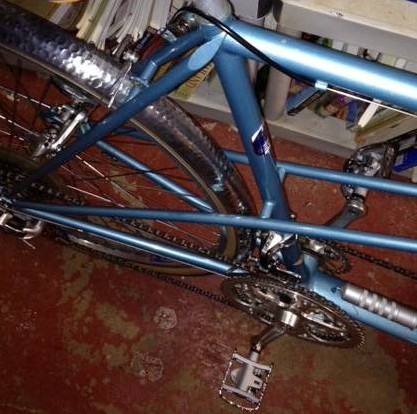 with Shimano SPD clipless pedals for both captain and stoker.

The stem is a Nitto Technomic with matching Nitto bars. The Gilles Berthoud handlebar bag

So there it is, revived and revised, another classic Bertin T2 tandem again available and ready for another summer of commotion!