Cycles Bertin Belge and Cycles Bertin France were two different companies connected by family ties and the circumstances of the post WW II European economy. There is a three-part series on the blog with more details located here which explains the origins and product offerings of the Belgian firm. One of the anomalous things about the Belgian Bertins was the use of Reynolds tubing in the framesets of the light weight/racer style of bikes.

In the early days, perhaps the 60s and 70s, higher end Belgian Bertins had 531 framesets but mid-line bikes had frames or framesets made of Reynolds A quality tubing. Probably due to tariffs in the immediate post war period (pre-EU), Cycles Bertin Belge did not use much in the way of French tubing like Vitus or of French components like Mafac, Stronglight and so on. Instead, they used Reynolds, Ishiwata, Weinmann, Sugino and Shimano. The result was a line of unique products which did not always parallel the offerings of the French company. What puzzled me when writing the earlier series about Belgian Bertins, was the company’s use of Reynolds A tubing. I had never heard of this product in the  45 years I have been cycling as an adult.

A Google search revealed a math text-book worth of numbers: 531, 453, 500, 708, 753, 525, 653 and on and on. No Reynolds A. The only places I saw the identifying label was on photos of Belgian Bertin frames and the occasional other European bike like Zeus. Having little luck on-line, I emailed Reynolds Technology to ask about their former product. I received a response from one of their technicians who helped clarify the matter. Reynolds actually made two similar products in the 1960s to 1970s called Reynolds A and B tubing. Keith N. of Reynolds, pointed out that these tubings were mild steel/hi-tensile in nature with about 60% of the ultimate yield strength of Reynolds 531 which would put A tubing at the after brazed strength of around 27,000 psi compared to 45,000 psi for 531. Keith also pointed out that the tubing was a combination of cold drawn seamed tubes and seamless tubes. As well, they were available in 3 different gauges and in butted and plain gauge sets. I do not know if the lightest sets were A and the heavier sets were B or there was some other specification for B series tubing. He also provided scans of the Reynolds technical pages for Reynolds A and B. See below:

Reynolds used SWG thickness measures and I have converted these to Metric measurements for the lightest Reynolds A set and then added them to a chart to enable comparison with other lightweight hi-tensile and classic lightweight tube sets.

The chart shows that Reynolds A was certainly competitive in weight and strength against products like Columbus Zeta, Vitus 888, Vitus Durifort (the butted version of 888) and Falck B and Libellula tubing. It was also not far off the standard tube sets like 531 and Columbus.

Like 531, frame decals were used to identify the Reynolds A tubes built into a frameset. Some were for main tubes only: 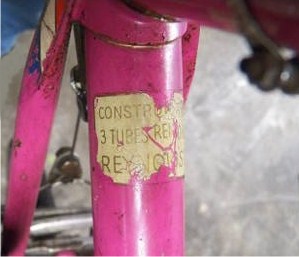 Other framesets were built with hi-tensile butted main tubes with Reynolds A also in the forks and stays. Those tubing decals look oddly familiar:

Also, like 531 decals, Reynolds A decals were available in French and English. Eventually, either because of the TI (Tube Investments) takeover of Raleigh in 1960 and a rationalization of product lines or due to declining demand for a budget quality tubeset easily replaced by 531 plain gauge, by the 1970s Reynolds A and B were gone. Their place on Belgian Bertins was taken by Ishiwata tube sets. But Reynolds A an B‘s niche was not forgotten. In 1980, Reynolds introduced SMS tubing (see the spec chart above) a full, welded  hi-tensile set which was taken up by Continental manufacturers like Elvish, Gitane, and Zeus.

It was discontinued in 1982 as Reynolds 453 was introduced into a rapidly innovating tubing  market jammed with alternatives like chrome-moly, aluminium and titanium. It was to welded aluminum that Cycles Bertin eventually went for their line of bikes leaving behind forever the days of Reynolds steel framesets.