About a month and a half ago, I wrote a post on two Bertins that were found in Northern France by Kevin R. an expatriate Briton. He was kind enough to share the details and photos of the bikes which I subsequently posted. Well, he has been scrounging the boot sales, bike jumbles and on line sales sites and has found another lovely Bertin in wonderful condition. Study the photo below, there is something unusual about this 49 cm bike. 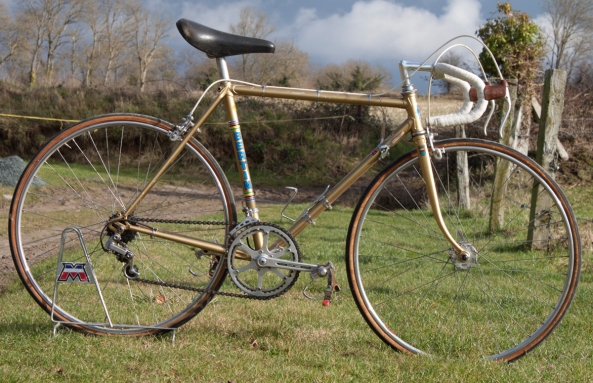 It is a mid to late 70s Bertin sport bike that has a full Vitus Durifort frameset, Maillard HF, QR hubs, TA Pro Vis 5 crankset, Shimano derailleurs, Weinmann sidepull brakes and tubular tires. When you look closely at this well proportioned, well equipped bicycle you simply do not notice that this is a very small bicycle.  It is actually a Bertin C 33 intended for juvenile riders (or possibly small statured women) and looks normal because it wears 650 series tubular rims and sewup tires.

Just another example of the extra thought in the design, specification and manufacture that Andre Bertin and his team put into even the smallest market segment that they worked in.