While browsing on the Internet the other day, I was checking EBay UK for Milremo products. Since Andre Bertin and Ron Kitching were partners in the creation of this brand of cycling accessories, I was curious about the range as I was considering doing an update to an earlier post  I had written on the topic. After my Search results came up, there were the usual water bottles, bar end plugs, pumps and such like. To my surprise, there was also one of these: 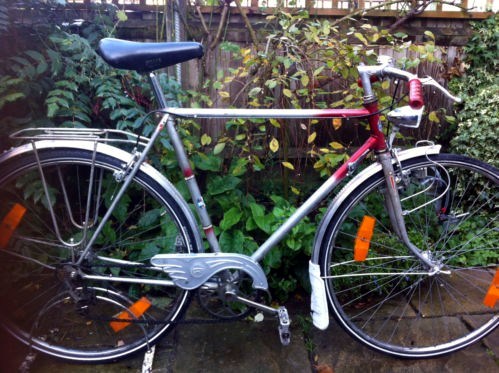 This is a Milremo branded bicycle. More particularly, it is a town bike made by Cycles Bertin Belgium. My first thought was that the seller had misclassified the bike as the graphics and construction were so obviously Bertin. Not so, as a careful look at the following photos reveals. 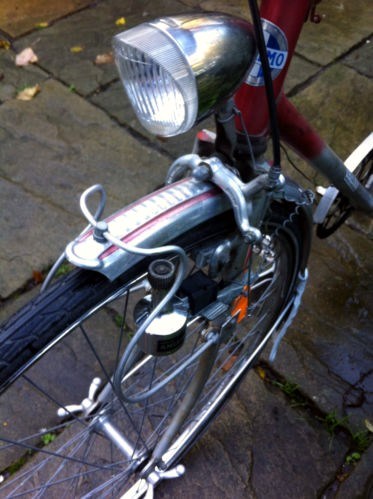 However, this certainly cannot be said of the photo of the matching seat tube decal as it clearly reads Milremo. 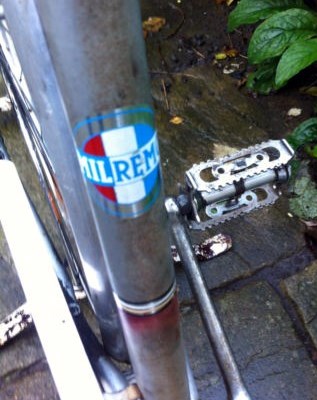 Oddly, as mentioned above, the bike has many hallmarks of Belgian production. It features the brazed on rear carrier attached to the rear dropouts and painted to match the frame. 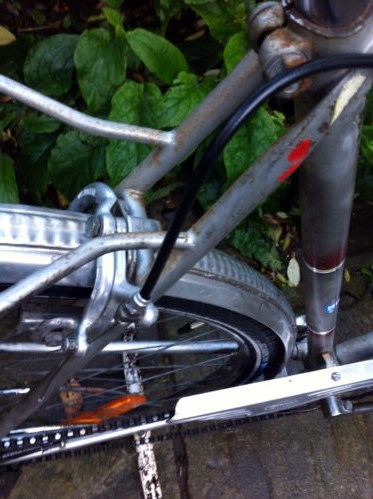 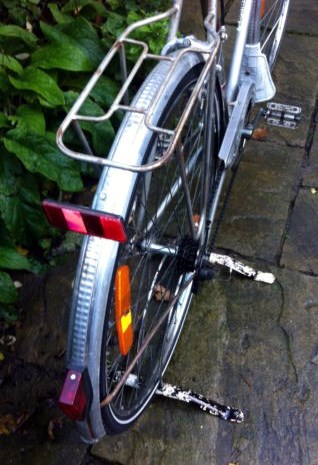 It uses Weinmann levers and brakes which were seldom seen in French production, Mafac being the brake of choice for utility bike fittings there. Also, the headlight is fitted to the front fork while production in Arras used brazed on tabs on the left rear seat stay to  mount the generator. Noteworthy as well was the A/D decal immediately below the seatlug which is characteristic of Belgian Bertin production.

The bike is so well thought out and presented, even down to the front hub with its stylish wing nuts and the brazed on fender stay/bag support, that you wonder why it was marketed with the Milremo brand rather than as the Bertin it so clearly is . 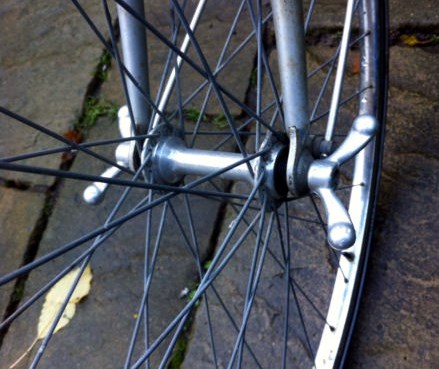 As it is, it seems that this Milremo will remain a stylish and eye-catching anomaly until EBay casts up another example.

While mentioning EBay, I would like to thank Mark, the current owner, for his kind permission to use his photos for this post. The bike can be found here in his shop, should any reader wish to see it.

Models in Belgium seemed to differ from those in France. I currently have no catalogues from this time and production but the photos of the samples below show deviations from French models. The only truly comparable one seems to be the C 37 although I have never seen it identified as such in Belgian sites or photos.

Accessorized for Daily Use and Touring 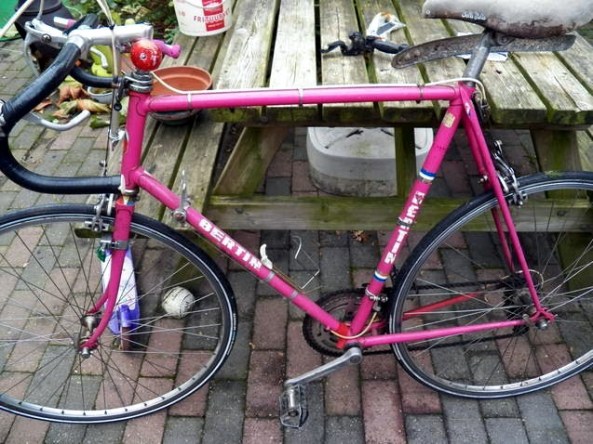 This Bike Has a Reynolds “A” tubing Main Frame and Sticker 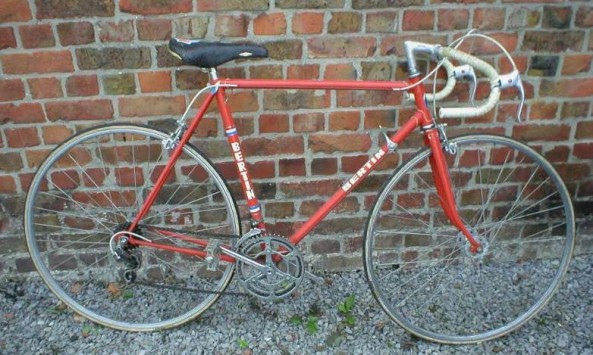 Crankset and Derailleurs are Stronglight Cottered and Huret

This Bertin Has a Full 531 Frameset and Tubular Tires 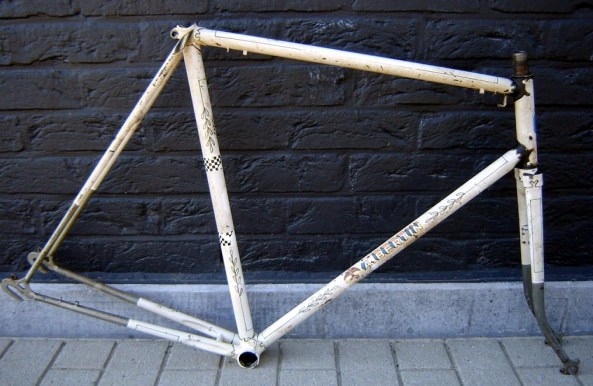 The decals for seat and down tube lettering on Belgian Bertins differed stylistically from those offered in France as mentioned above. The graphics below were shared with me by another Bertin enthusiast and they are reproduced here as an aid for current owners wishing to refurbish their Belgian made bikes.

For a small manufacturer, Cycles Bertin had remarkably productive relationships with partners in both Belgium and Morocco resulting in a diversity of models and finishes that, at least partially, continues to exist even today.

Once Belgian production began, there were real  not just cosmetic differences between the two factories products.

One of the things which differentiated French Bertins from other home market semi and mass producers of bicycles was their commitment to quality framesets. Only the very lowest price points used hi-tensile steel for the frames and forks. All the other French models, from just above basic to top-of-the-line proudly wore the Vitus, Reynolds or Columbus stickers which announced the frameset’s pedigree.

One difference with Belgian Bertins was, that for much of the production of the Belgian factory, the frames only infrequently wore tubing decals identifying the steel beneath the paint.

As well, the frame covering often wasn’t even paint as the Belgian production framesets were powder coated, one of the first commercial applications of the technology on “mass-produced” bicycles I have ever seen.

Production in France was wet paint technology as can be seen in the two accompanying photos that often serve as rotating header pictures. The earliest shows the original factory’s spray shop and the other shows the automated production set up of the “new” factory built after 1973 in St. Laurent-Blagny.

Powder coating was invented in the late 1940s but really became widely commercially available in the mid-1960s. It seems likely that Belgian production dates from that period. The smaller volume in Poperinge may have permitted the alternate method whereas higher production volumes and more elaborate paint finishes in France may have necessitated the fast dry capability of wet applied paints. Typically, the Belgian Bertins with powder coat seem to be single colour in application due to the difficulty of masking and baking on of various colours.

Another distinction between French and Belgian production was equipment. French Bertins wore all French, Milremo, Campagnolo and, of course, Shimano equipment. Cycles produced in Poperinge had Weinmann brakes in lieu of MAFAC or CLB, Weinmann rims, Sakae cotterless cranksets, Ishiwata tubes and varying types of seatposts and stems. All of this leads me to infer that the Belgian produced equipment was specified to avoid tariffs on French products because the branding is consistent across models and price points.

The finishes on Belgian produced Bertins didn’t conform to the French ones but they did adhere to a unique Belgian esthetic.

The following photo is of a Janssen – another Belgian producer which has the distinctive socks on the forks and stays often found on 60s and 70s bikes. Except these are painted silver and not the more typical chrome found just about everywhere else. And Bertins conformed to this practice as can be seen in the next sample of a comparable pale blue Bertin model found to the left.

Bertin paint finishes in Belgium often had finely detailed pinstripes on the tubes which their French cousins lacked altogether or had in much lesser abundance. Some pinstriping was distinctive like the “coffee bean” type found on this older model of Belgian

Bertin located on either side of the down tube lettering.

Another distinctive were the racks attached to the sport, utility and touring varieties of Belgian production. The Cycles Bertin method

was to build chromed steel racks and then attach them firmly to frame braze-ons or, occasionally, to fenders as well.

Belgian production brazed the racks directly to the rear stays and dropouts and painted them the frameset colour making for an outstandingly robust rack but with a parallel sacrifice of flexibility in the use of the cycle.

Like their French cousins, Belgian production often decorated the caps of the rear stays with contrasting paint or decals. However, they also had multi-coloured accent treatments on the fork crowns as well with up to three colours on occassion as well as paint on the lugs, a graphic treatment abandoned in France in the late 60s or early 70s.

Decals in Belgian production had a quirky non-conformity to them. The bikes were produced under licence and used the same foil head tube decal so familiar from the French Bertins produced in St. Laurent-Blagny. Very early Belgian production, typically wore the A.BERTIN decal seen in the photo above, which in France typically showed up on utility and folding bikes. As well, Belgian bikes wore French tri-colour ribands around their

seat tubes rather than the red/yellow/black tri-colour of Belgium or the World Championship stripes seen on French production.

The later BERTIN decals seen on Belgian Bertins were completely different sans-serif capital letters unlike any of the graphics from France. Similar? Yes, but unique. (See the Decals section in Part 3 for samples.) Sometimes, the seat mast decal would have a solid colour and a second BERTIN label would be found on the down tube. Although similar to the French style and placements, Belgian Bertins had their own unique style. 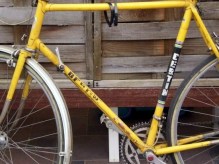 The story of Cycles Bertin would seem to be a French story. The founder was French, born in Ecques in the Pas de Calais, the business operated out of the Arras area in northern France, the

logo of the company featured the French tri-colour with a superimposed eagle – what could be more French.

So, how does Belgium enter into the narrative? The basis of this story is that this area of Europe is a border area. Sometimes independent, sometimes ruled by the Spanish, sometimes by the French and sometimes by the Dutch the fluidity of the area’s politics had little to do with families who lived in the region. The border moved back and forth over them, arbitrarily making some family members French or Dutch or, after 1830, Belgian, once political independence arrived.

This would seem to be what happened to the Bertin family. Prior to World War 1, Andre Bertin’s immediate family lived in the small town of Ecques, about 8km south of St. Omer in the Nord Pas de Calais. This is very close to the Belgian border which is several kilometres to the north and east of the commune.

WW 1 had them re-locating to St. Laurent-Blagny just outside of Arras which is where, in the mid-1930s, Andre Bertin began his motorcycle and bicycle parts business in parallel with his professional cycling career. While the tides of war had displaced Andre Bertin’s family, some extended family must have remained in Belgium.

Once World War 2 had ended and European recovery began in conjunction with the Marshall Plan, Andre Bertin ramped up production of affordable 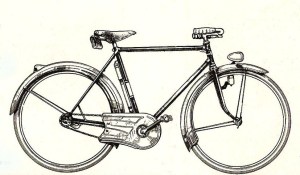 utility and transportation bicycles in the later part of the 1940s. Gradually, as prosperity took root, sport and racing bicycles began to be catalogued and sold by Cycles Bertin.

While this was going on in France, Bertin’s extended family had not been idle in Belgium. As Cycles Bertin was exporting to Britain, New Zealand, Morocco and Viet Nam and assembling bicycles in Morocco as well, one of Andre Bertin’s cousins had established a production facility in Belgium.

This, apparently, was not a subsidiary of Cycles Bertin but a production facility that licensed the trade marks and name and did not merely turn out clones of the standard French production models. It appears to have been started in the late 1950s and very much went its own unique way in terms of specifications, graphics and production techniques. The factory seems to have been located in Poperinge, Belgium about 100 km North of the Arras area. This town of about 20,000 is around 15 km from the Franco-Belgian border and within easy distance of the Bertin factory in St. Laurent-Blagny.

Belgian Bertins Part 2: Not How Andre Made Them! (Variations, Finishes and Decals)